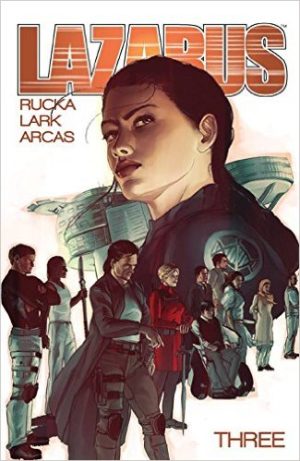 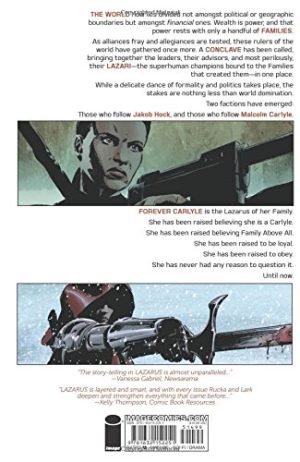 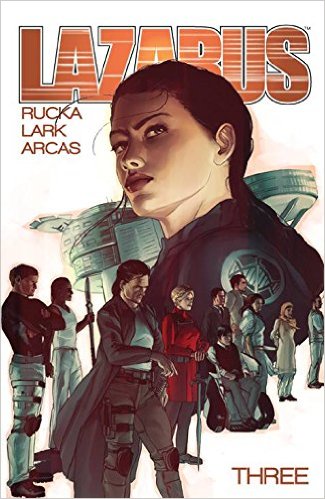 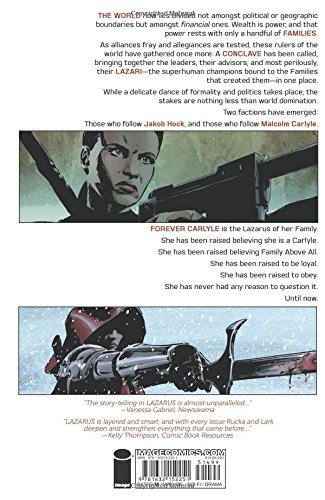 “Rucka’s storytelling is comprehensive, weaving sociopolitical rhetoric and class structure to an extent seldom seen in the medium. Meanwhile, Lark manages to take Rucka’s seriousness to a new level with dark edges, shadowy panels, and ferociously kinetic action. Each page turn is cinematic, just another reason this book might appeal to cross-platform fans of crime movies and TV programs, such as The Godfather or True Detective, as well as police procedural comics, such as Rucka’s Gotham Central or Brian Michael Bendis and Michael Avon Oeming’s Powers.” –Booklist

In a dystopian near-future, government is a quaint concept, resources are coveted, and possession is 100% of the law. A handful of Families rule, jealously guarding what they have and exploiting the Waste who struggle to survive in their domains. Forever Carlyle defends her family’s holdings through deception and force as their protector, their Lazarus. The 16 Families have gathered together in the exclusive luxury confines of Triton One to resolve the emerging conflict between Carlyle and Hock, and they’ve brought their Lazari with them. While Forever’s romance with the Morray Lazarus, Joacquim, continues to blossom, she finds herself not only questioning her identity, but also her loyalty to her Family and her father, Malcolm, when orders her to kill her brother, Jonah.